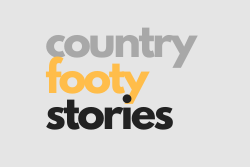 Brownlow Wrap | With former Echuca FNC player Ollie Wines winning the 2021 Brownlow Medal, it would be remiss to not tap into the Brownlow through a Victorian country footy lens.

It makes sense too, since the very first Brownlow medal winner Edward "Carji" Greeves was born in Warragul and played at Berrybank FC in the Western Plains FA before going to Geelong College and eventually Geelong FC where he won the award in 1924.

Wine’s win on Monday night not only made him Port Adelaide's 1st Brownlow medalist, but the first for Echuca FNC and also the first from the Goulburn Valley FNL. He is the 31st winner from a Victorian country football club background and his vote tally of 36 equals the highest number of votes for a winner, tying with another country footy club product, Richmond’s Dustin Martin who originally hails from Castlemaine FNC. On receiving 9 votes in the 2021 count, Joel Selwood (Sandhurst FNC) moved to 5th on the overall list of Brownlow votes polled, taking over from another former country recruit, Hawthorn and AFL legend, Leigh Matthews (Chelsea FNC).

In this year's count, besides Wines topping the winners list, the top 10 vote getters were comprised of 5 players from country football backgrounds including Clayton Oliver from Mooroopna FNC, Sam Walsh from St Joseph’s, Darcy Parish from Winchelsea and Travis Boak from Torquay. 48 Victorian country clubs had AFL listed players receive votes, the most in total being from Cobden FNC in the Hampden FNL with 43 votes from 4 players ( Ben Cunnington, Sean Darcy, Zach Merrett & Gary Rohan), ahead of Echuca with 36 votes (Wines) and St Joseph’s with 35 (Sam Walsh & Taylor Adams).

Unsurprisingly with the winner coming from Echuca and the strong voting of Oliver and David Mundy (Seymour FNC) the Goulburn Valley was the highest voting league with 91 votes in total ahead of the Hampden FNL (53), Geelong FNL (50) with the Bellarine FNL and MPNFL (35) rounding out the top 5 list of leagues. The top 10 of both can be found below.

A final side note from Wines’ win is that both his father Tony and John Dangerfield, father of 2016 Brownlow medalist Patrick, were both teammates for Anglesea FNC in their 1983 Bellarine FNL premiership win. Best on ground for Anglesea in their grand final win was Brian O’Keefe, father of dual Sydney Swan premiership player and 201 Norm smith medalist Ryan, when they defeated Torquay FNC by 14 points. Playing for Torquay that day was none other than Roger Boak, father of Wine’s current teammate Travis, who himself polled 25 votes in the 2021 count. Whilst country footy has provided so much talent for the VFL/AFL over time, it would be hard to one other individual match that has produced much more than this 1983 grand final.