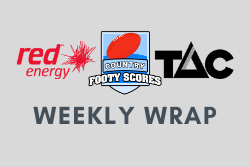 Weekly Wrap | The big guns were out and about in country football leagues this weekend with 3 former AFL players, who between them shared a combined total of 695 games, 342 goals, 3 premierships and a Brownlow Medal, running out for country clubs for the first time.

Former Swan and Magpie, Daren Jolly, helped East Point FNC in the Ballarat FNL to an 88 point win over Darley while in the Goulburn Valley FNL it was former Tiger Alex Rance lining up for Seymour FC as they had a comfortable 41 point over Mansfield. Rounding out the trio was former Magpie Dane Swan, who managed to get into the best players, but he was unable to help his adopted Lucknow FNC get the points as they fell agonisingly short to Stratford FNC to lose by a solitary point, 9.5 59 to 9.4 58.

Close games seemed the order of the weekend starting with a draw between Karingal and Chelsea in the Mornington Peninsula Nepean FNL and a further 6 games decided by the narrowest of margins. Inaccurate kicking by Sale FNC in the Gippsland FNL kicking an incredible 9.20 74 meant they were incredibly lucky to hold on against Bairnsdale who ended up with 11.7 73. In the Goulburn Valley FNL it was Shepparton FNC for the second time this season, defeating Mooroopna FNC by a point and in the Ellinbank and District FNL, Catani pulled off a 1 point win with a kick after the siren, that denied Yarragon FNC their first win of the season, the scores ending up 10.4. 64 to 8.15 63.

Whilst Yarragon will have to wait another week to try and notch up win number 1 for 2021, 6 winless teams managed to get on the board for the first time, including Echuca United FNC in the Murray league who parted ways with their coach mid week and finished Saturday running out 40 point winners over 9th placed Barooga FNC. At the other end of the spectrum, 9 previously undefeated teams were on the other end of the results column for the first time, leaving 26 undefeated teams across country Victorian leagues.

When it comes to the big scores for the weekend, the Maryborough Castlemaine District FNL was again the epicentre, with Carisbrook FNC kicking 42.26 278 to run out 250 point winners against Maryborough Rovers FNC. Just down the road, Trentham FNC piled on 37.17 239 to run out 227 point winners against the struggling Dunolly FNC. Unfortunately at the other end of the scale, Inglewood FNC in the Loddon Valley FNL, only managed a solitary point in their 177 point loss to Maiden Gully YCW.

Carisbrooks’ big score included a bag of 14 goals by Anthony Zelencich which moved him up to 3rd on the season’s top 20 goal kickers list. However the race to be the first to kick 100 goals for the 2021 season has started to narrow with a 17 goal haul to Violet Town’s Joshua Mellington propelling him to the top of the leaderboard, as he leap frogged last week’s big goal kicker, MIllicent’s Gene Robuinson, who now sits second with 69 goals. A further 5 players reached the 50 goal tally after this weekends games including Korey Loechel from Nangiloc FNC in the MIllewa FNL, Kylin Morey from Cudgewa FNC in the Upper Murray FNL and Lachlan Sharp from Strathfielsdaye in the Bendigo FNL.