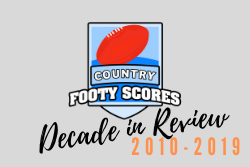 Decade in Review | As part of our review into the last decade of country footy, we have listed every club's winning % from 2009 - 2010.

The criteria was simple.  Rank all the clubs by senior permierships won first, then by their overall winning pecentage which is based on games played, won, lost and drawn.

Now there are some inherit challenges with doing this, namely clubs that went into recess for any period of time, those clubs that merged and those that changed leagues during this time.

So with all that in mind, the list was created based on any games played by clubs during the 2009 - 2019 period.

Clubs that have merged will be listed as both an indinvdial club and also as a merged club, most clubs in this situation have been highlighted in the table.  In a similar way, clubs that have moved leagues are listed in as being in their current legue, but have games taken into account for any league they played in during the last 10 years. Any clubs that went into recess are still listed in the table and their % is calculated on any games they played, be it 1 season or 9.

Whare does your favourite club rank?