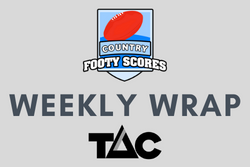 Weekly Wrap | September normally means the smell of cut grass, grand finals and sunshine, however with fifteen premierships up for grabs this weekend the weather gods didn’t hold up their end of the bargain.

Wind and rain were a feature of games played on Saturday right across the state and not for the first time this season, games were interrupted due to lightning. In the Outer East NL Premier Grade finals on Sunday, both the Senior football and B grade netball match starts were delayed before they could get under way.

In the Goulburn Valley FNL both the senior football and A-grade netball matches were halted due to lightning. There was a major strike nearby that forced a 30 minute delay at the 23 minute mark of the 1st quarter while Euroa FNC held a 15 point lead. After the restart, Mansfield FNC were not able to make up the difference and ended up going down by 24 points, with Euroa now progressing to next Sunday's Grand Final where they will meet red hot favourites, the Echuca FNC.

The wet and wild weather meant that scoring was down right across the weekend. The average winning margin across the grand finals was only 16 points, with 6 games decided by 10 points or less and only 9 clubs managing to kick 50 points or more in their games. The Tallangatta and District FNL match between Chiltern FNC and Kiewa Sandy Creek FNC only managed a combined score of 50 points itself, with Chiltern prevailing to become premiers, 4.9 33 to Kiewa Sandy Creek’s 2.5 17.

The closest grand final decider was in the Murray FNL where Mulwala FNC managed a 3 point win over Cobram FNC, 7.5 47 to 6.8 44. Mulwala were behind all game, only hitting the front for the first time for the game at the 15 minute mark of the last quarter, eventually hanging on to win against the red hot favourites. The win broke a 32 year premiership drought for the Lions. However this wasn’t the biggest premiership drought broken on the weekend which occurred in the Ovens & King FNL, where the Benalla All Blacks FNC had a 25 point win over Bonnie Doon FNC,thus ending their 41 years without premiership success.

Three clubs joined the Premiers and Champions list for this year, going through the season undefeated and also winning the flag. In the Ellinbank & District FNL it was Neerim South FNC, Leongatha FNC in the Gippsland FNL also managed the perfect season as did Narre Warren in the Outer East FNL Premier Division. Meanwhile in the Hampden FNL, the incredible premiership streak of Koroit FNC continued with the Saints claiming their 7th flag in a row with a 5.15 45 to 4.5 29 win over North Warrnambool FNC.

For all the great premiership stories over the weekend, there were two unfortunate incidents that marred two different league celebrations. In the Kyabram and District FNL officials have launched an investigation into an incident that occurred moments after the final siren of the senior football grand final on Saturday where Lancaster FNL had a 10 point win over Murchison-Toolamba FNC. A brawl involving players and spectators began when spectators ran into the middle of the ground after the siren sounded. It is currently unclear how it started. The brawl lasted for several minutes and flared up several times, despite the best attempts of both clubs members to separate those who were involved.

In the Maryborough Castlemaine District FNL there was an ugly off-field brawl that involved a player and spectator, which took place halfway through the 3rd quarter. While two spectators exchanged punches near the boundary fence, a Carisbrook FNC player jumped the fence and threw punches at spectators. After this the player then returned to the field of play as other spectators then tried to pull the two fighting groups apart. The player was red carded for his involvement, which left Carisbrook FNC to finish the game against Harcourt FNC with only 17 players on field. Harcourt FNC would eventually prevail to become premiers 9.4 58 to 7.8 50, while the league is set to launch an investigation into the incident

Next weekend sees the 2022 country footy season come to a close with the remaining 3 premierships to be decided in the Outer East Div 1 FNL, Goulburn Valley FNL and Ovens & Murray FNL. The Outer East FNL game takes place on the Friday public holiday while the remaining two games take place on the Sunday after the AFL Grand Final.